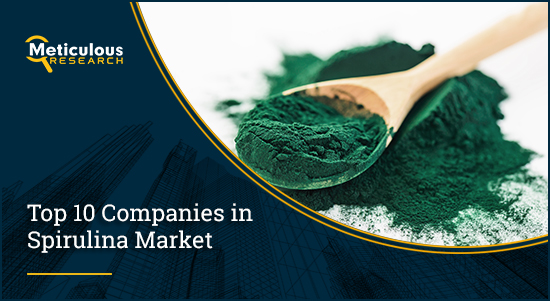 Spirulina is being developed as the “food of the future” because of its remarkable ability to synthesize high-quality concentrated food more efficiently. Spirulina contains 65 to 71 percent complete protein, with all essential amino acids in perfect balance. It appears to have considerable potential for development, especially as a small-scale crop for nutritional enhancement, livelihood development, and environmental qualification.

Here are the top 10 companies operating in spirulina market–

Founded in 1997 and headquartered at Kunming, China; Yunnan Green A Biological Project Co., Ltd is engaged in developing, breeding, production, marketing, and research of micro-algae products. Yunnan Green A Biological Project Co., Ltd acts as a subsidiary of Yunnan Spirin Biotechnology Co. Ltd. The company’s annual microalgae (spirulina, chlorella, and Haematococcus Pluvialis) production is 3,000 metrics ton per year. The company offers spirulina in the form of powder, tablet, and extract-phycocyanin. The company uses spirulina and haematococcus pluvialis into many fields such as health care products, medicine, cosmetics, and foods.

Green A’s research and development production base is located beside Chenghai Lake, Yunnan province, which is one of the biggest three alkaline lakes naturally producing spirulina in the world.

The company offers spirulina in the form of tablet and powder. The products have been inspected by Inner Mongolia Autonomous Region Product Quality Supervision and Inspection Institute and Inner Mongolia.

The company has spirulina farm of 108 acre and offers spirulina and spirulina-based products in over 20 countries around the globe.

Founded in 1995 and headquartered at FuQing, China; Fuqing King Dnarmsa Spirulina Co. Ltd. is engaged in breeding, production, selling, and scientific research of algae. The farm owns seven cultivation farms, one algae research institute, and one algae product deep processing workshop. The farm offers spirulina products in the form of powder and tablets.

The company’s cultivation farms have an annual output of 1,600 ton of spirulina and 400 ton of chlorella. The company serves customers in Europe, the United States, Australia, Southeast Asia, and other countries and regions.

The farm has passed organic test and its spirulina/chlorella powder and tablets are organic certificated. Their products are widely used in medicine, health products, food, and fine chemical extraction sectors. The company is a long-time supplier for pharmaceutical and food companies both in China and worldwide.

A report into the projected growth of the current Spirulina Market
by Meticulous Research® has produced some incredible forecasts for the industry. By 2028, it’s expected to have grown at a CAGR of 9.5%, reaching over $730.3 million.

Founded in 1994 and headquartered at Dongtai, China; Dongtai City Spirulina Bio-engineering Co. Ltd. is engaged in developing, manufacturing, selling, and research of spirulina and chlorella. The company offers spirulina in the form of tablet, powder, and phycocyanin powder and has a production base of 600,000 sq. meters.

Founded in 1998 and headquartered at China; Qingdao Haizhijiao Biotechnology Co., Ltd is engaged in manufacturing and supplying of spirulina and chlorella and related products. The company has 7 cultivation farms of area 1,000,000 sq. m. The company’s production of spirulina is 1,000 metric ton per year and of chlorella is 150 metric ton per year.

The company sells 90% products to more than 30 countries of the world and 10% in domestic market.

Founded in 1984 and headquartered at Kailua Kona, U.S.; Cyanotech Corporation is engaged in the cultivation and production of natural products derived from microalgae for the health and human dietary supplements. The company provides microalgae, namely Bioastin and spirulina. The company has microalgae cultivation ponds of 90 acres.

The company has its geographic presence in Europe, Asia Pacific, and the Middle East & Africa

Founded in 1788 and headquartered at Chennai, India; E.I.D. – Parry (India) Limited is engaged in manufacturing of sugar, bio pesticides, and nutraceuticals. The company operates as a subsidiary of M/s. Ambadi Investments Limited. The company provides organic spirulina, chlorella, and micro algal products in the nutraceuticals space. It offers spirulina in the form of bulk powder and tablet.

The company has a total area of 130 acres with a pristine ground water supply for cultivation of spirulina and chlorella. The company’s spirulina is sold in more than 41 countries across the globe and has its geographic presence in India.