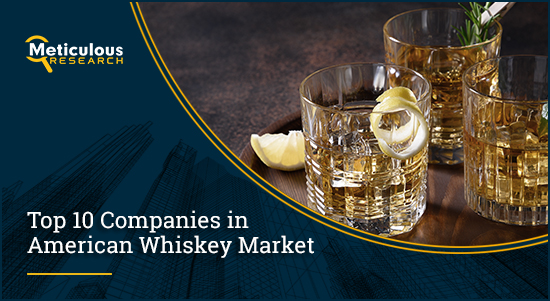 The Global American Whiskey Market is expected to grow at a CAGR of 9.9% from 2019 to reach $16.8 billion by 2025. Bourbon, Tennessee, and Rye are the three types of American whiskies. Over the past few years, there has been increasing demand for American whiskey across the globe. Kentucky and Tennessee are the whiskey capitals of America, and more smallscale distilleries are emerging in Ohio, New York, and Colorado. Bourbon whiskey production is permitted across the United States, but is highly concentrated in Kentucky, which produces in excess of 95% of all bourbon.

Here are the top 10 companies operating in American Whiskey Market–

Beam Suntory, Inc. is a subsidiary of Suntory Holdings and is the third largest producer of distilled beverages worldwide. The company is the producer and distributor of premium-branded distilled spirits. The company’s product portfolio include bourbon whiskey, Scotch, tequila, rum, and ready-to-drink cocktails. The company is driving growth through product innovation and impactful marketing across the globe.

The company is focusing on boarding its geographic reach by promoting and exporting its products in new geographies. The company has major presence in the U.S., Japan, Western Europe, Mexico and Latin America. The company was formerly known as Beam Inc. and changed its name to Beam Suntory Inc. Japan’s Suntory Holdings acquired Beam in 2014, forming the world’s number three premium spirits company

Brown-Forman is one of the largest American-owned spirits and wine companies and among the top 10 largest global spirits companies. The company sells its brands in countries around the world and has offices in cities across the globe. The company has more than 25 brands in its portfolio of wines and spirits. The company’s portfolio of mid-priced to super-premium brands includes spirits as Jack Daniel’s, Canadian Mist, Finlandia, Southern Comfort, and Woodford Reserve.

The U.S. is the largest market for Brown-Foreman, accounting for about 47% of the company’s revenue in 2019. The company’s largest foreign markets include Europe (the U.K., Germany, France, Russia, Turkey, and Poland) with about a third of sales, and Australia contributing 5%. Other important markets include Mexico, Japan, Dubai, and Canada.

The company owns manufacturing production facilities across the world. Diageo North America handles its parent’s operations in the U.S. and Canada. The company’s maturing American whiskey is located in Kentucky and Tennessee in the United States

Davide Campari-Milano S.p.A., together with its affiliates (Gruppo Campari), is a major player in the global beverage sector, trading in over 190 nations around the world with leading positions in Europe and the Americas. The Groups portfolio, with over 50 brands, spans spirits, the core business, wines and soft drinks. Internationally-renowned brands include Aperol, Appleton Estate, Campari, Cinzano, SKYY and Wild Turkey. Wild Turkey is distributed internationally, its main markets are the U.S., Australia , and Japan.

Wild Turkey is a brand of Kentucky straight bourbon whiskey distilled and bottled by the Wild Turkey Distilling Co, a division of Campari Group. The distillery is located near Lawrenceburg, Kentucky. In North America, the Wild Turkey brand is sold through Gruppo Campari-subsidiary Skyy Spirits

Heaven Hill Brands is one of the leading largest independent, family-owned marketers and producers of distilled spirits products in the U.S. Heaven Hill is now the sixth-largest spirits supplier in the United States and second largest holder of aging Bourbon whiskey in the world with an inventory in excess of 1,300,000 barrels. In 2014, the company changed its name to Heaven Hill Brands from Heaven Hill Distilleries, Inc.

The company is based in Bardstown, Kentucky with facilities in Louisville and Bardstown with its marketing and sales presence across the globe. Heaven Hill’s portfolio includes the world’s second-largest selling Bourbon, Evan Williams Bourbon alongside dynamic brands including Deep Eddy Vodka, Lunazul Tequila, Elijah Craig Small Batch Bourbon and others

Meticulous Research in its latest publication on global American Whiskey Market has predicted the growth of 9.9% during the forecast year 2019-2025.

The company is doing business as John Handy Company and operates as a distilling company in the U.S. Buffalo trace distillery, A. Smith Bowman, Gemini, Glenmore Distillary, Barton Brands, Medley, Fleischmann, and Old Mr. Boston are few of the leading distilling companies owned by Sazerac Company.

Kirin company owns Four Roses, a leading american whiskey brand Previously brand has been owned by Seagram and Frankfort Distilling Co. Four Roses Kentucky Straight Bourbon is one of the popular brands of the company and has been one of the top selling bourbons in the U.S. since 1930. Over the years the brand has gained popularity across the globe and Four Roses has gained acceptance in the rapidly growing European and Asian markets where it quickly became the top selling Bourbon and remains a top-selling Bourbon in both Europe and Japan today.

With strong network of distributors and brokers company distributes their products in all 50 U.S. states and the District of Columbia and in thirteen primary international markets, including Ireland, Great Britain, Northern Ireland, Germany, Canada, France, Finland, Norway, Sweden, Denmark, a nd the Duty-Free markets

In 2005, Tuthilltown Spirits brought the tradition of small batch spirits production back to the Hudson Valley. The company operates as a subsidiary of William Grant & Sons. Tuthilltown Spirits distills Indigenous Vodka from apples grown at orchards less than five miles away and the highly awarded Hudson Whiskey line, using grain harvested by farmers less than ten miles away.

The company has 50 hardworking and creative member continuously are developing new products and cocktails.