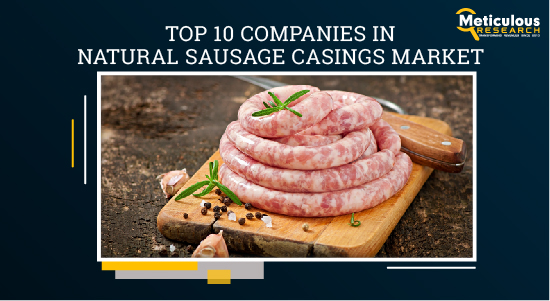 Sausages are among the cheapest processed meat products available and are becoming quite popular in developing markets as consumer’s transition away from cereal based diets to more intensive animal protein based. Since decades, these sausages are made by stuffing an animal’s pureed internal organs into its intestines, called as “natural casing”. Natural casings are the traditional approach and have a track record of centuries of use as containers for sausage products. These are primarily collagen from animal gastrointestinal tracts that have been stripped of the contents and of the fatty outer covering. It gives shape, size, and integrity to sausages by their unique natural curve and sheen. Also, it allows deep smoke penetration to produce sausages that are rich in flavor and aroma, without contributing any conflicting flavoring of their own. For sausage manufactures, these characteristics yield high quality products that are uniform in flavor. As a result, natural casings market has been booming since decades.

The company has its geographical presence in the U.S., Japan, Europe, and Australia.

Founded in 1964 and headquartered at Ransbach-Baumbach in Germany; PeterGelhard Naturdärme KG is involved in the procurement, processing, packaging, and supply of natural casings products.The company offers the natural casings derived from cattle, pig, and sheep under the brand name Rheingold. With several manufacturing and storage facilities in Germany, Poland and China, the Company sell its casing across North America, Europe, South America, and Middle East.

Founded in 1968 and headquartered at Amsterdam in the Netherlands; CTH, a subsidiary of Darling Ingredients, is involved in collection, manufacture, sales and distribution of natural casings, and meat by-products for the food, pet food, and pharmaceutical industries worldwide. The company offers the natural casings derived from cattle, pig, sheep, and horse.

With the operating plants in Germany, Belgium, Poland, Spain, Portugal, China, the USA, and Brazil, the company has its geographic presence in Europe, Asia, North America, South America, and Australia.

With number of affiliated sister companies and distributors, the Company has its geographical presence in Australia, New Zealand, and North America.

A report into the projected growth of the current Natural Sausage Casings Market by Meticulous Research® has produced some incredible forecasts for the industry. By 2027, it’s expected to have grown at a CAGR of 2.1%, reaching over $2.75 billion .

Founded in 1951 and headquartered at Hartford, Wisconsin in United States; Natural Casing Co., is involved in the manufacturing and supply of natural casings. The company offers natural casings derived from cattle and pig.

The company has a geographic presence in Europe, United States, and South America.

Founded in 1950 and headquartered at Germany; A Holdijk GmbH is involved in the manufacturing, developing, and marketing of sustainable steel machinery and natural casings. The Company offers natural casings derived from hog, beef, and sheep.

The Company operates primarily in the European region.

With the manufacturing facilities in Spain, Chile, Brazil, China, the Company produces and markets its natural casing across North America, Europe, Asia-Pacific, and Middle East and Africa.

The Company has its own and contracted production facilities in New Zealand, Australia, Iran, Turkey, Europe, South America, and China. It sells its casing across North America, Europe, Asia-Pacific, Middle East, and Africa.

With the manufacturing facilities in Italy and the Netherlands, the Company sells its casing across the globe.