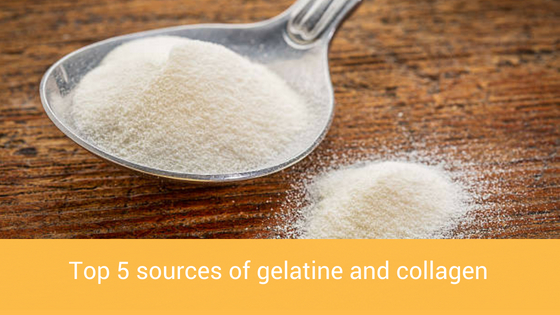 The South East Asia Collagen market is expected to grow at a CAGR of 7.2% during the forecast period to reach USD 142.84 million by 2023, says “Meticulous Research.”

In south East Asia, Collagen and Gelatin have been widely used in the food, pharmaceutical, and cosmetic industries due to their excellent biocompatibility, easy biodegradability, and weak antigenicity. Fish collagen and gelatin are of renewed interest, owing to the safety and religious concerns of their mammalian counterparts.

Here are the top 5 sources of gelatine and collagen –

Pig skin and other byproducts of pig processing are major raw materials used in collagen production. It is observed that around 55% of collagen produced is from the pig source. This is due to the large amount of pork being consumed across the globe that results in the abundance availability of raw material for the collagen manufacturing.

However, the factors like religious constraints pose a serious threat to the pork collagen market as Islam, Judaism, and few sects of Christianity does not allow its follower to consume the pork sourced collagen.

The biological subfamily bovine includes a diverse group of 10 genera of medium sized ungulates, including domestic cattle, bison, African buffalo, the water buffalo, the yak, and the four-horned and spiral-horned antelopes. Beef is the third most widely consumed meat in the world, accounting for about 25% of meat production worldwide, after pork and poultry at 38% and 30% respectively. This makes them one of the prime sources of collagen and around 20% of the collagen produced across the globe is from the bovine source.

However, the bovine collagen is being avoided by many as it poses a serious health risk of Bovine Spongiform Encephalopathy (BSE), Transmissible spongiform encephalopathy (TSE), Foot-and-mouth disease (FMD).

Fish is comparatively less common source of collagen, however, in recent years the fish collagen production is being increased cited to the religious constraints associated with the consumption of another sourced collagen.

Although less versatile than gelatin, fish collagen has received considerable attention for its potential as an ingredient in processed functional food manufacturing, as well as for cosmetic, biomedical, and pharmaceutical applications. Fish collagen on the other hand can be used as a nontoxic alternative collagen. It has the high absorption rate by human skin than another animal collagen. These qualities of fish collagen make it more suitable collagen option for the cosmetic industry.

Poultry or chicken is an important alternative source of collagen as it is second most widely consumed and produced meat across the globe which results in the byproducts that are essential for the collagen production. Chicken is used to obtain type II collagen from the cartilage, bones, and other tissues of a chicken like feet’s by treating with enzymes to produce an angiotensin-converting enzyme (ACE) inhibitory peptide.

Over the period of time, chicken collagen has gained a lot of popularity cited to its ability to reduce inflammation and treat joint pain.

Sheep collagen is comparatively holds the less market share as sheep meat is the least consumed meat across the globe. Sheep are primarily being used for the wool & milk production. Therefore, there isn’t much raw material available for the collagen production.

However, the factors like absence of religious constraints associated with pork collagen make it an important alternative across the Islamic countries.