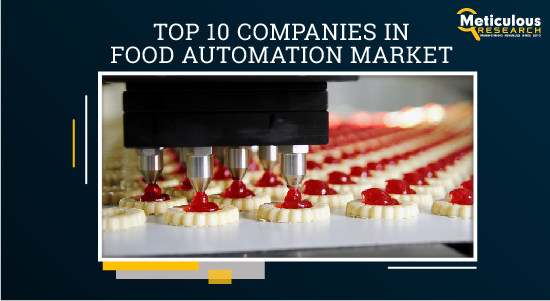 Founded in 1836 and headquartered in Rueil Malmaison, France; Schneider Electric S.E. manufactures energy management systems and automation solutions. It operates in four business segments which include building, infrastructure, industry, and Information Technology (IT).

The company provides automation solutions for food industry through its industry segment and provides software and solutions for brewery, dairy, baked goods and confectionary; cereal, grains, and ingredients, sugar, oil, and biofuel, and consumer packaged goods. The company has its geographic presence in North America, Europe, Asia pacific, and Rest of World region.

A report into the projected growth of the current Food Automation Market by Meticulous Research® has produced some incredible forecasts for the industry. By 2027, it’s expected to have grown at a CAGR of 9.5%, reaching over $29.4 billion.

Founded in 1903, and headquartered in Wisconsin, U.S.; Rockwell Automation, Inc. manufactures industrial automation and information solutions throughout the world. It operates in two segments, Architecture & Software, and Control Products & Solutions.

The company serves food and beverage, home and personal care, life sciences, automotive and tire, oil and gas, and mining and metal industries. The company has its strong geographic presence in the U.S., Canada, Middle East, Africa, Australia, China, India, Japan, and Korea and serves in about 80 countries worldwide.

The company provides services in ~250 locations and operates in 45 countries throughout the world. The company has its geographic presence in the U.S., South America, China, Korea, Taiwan, India, Indonesia, Philippines, and Vietnam among others.

The company serves food industry in the robotics, AC drives, and servo drives and machine controllers segment. The company has its geographic presence in the U.S., Canada, Mexico, Brazil, Japan, China, Germany, Italy, Sweden, France, and South Africa among others.

The company provides food automation solutions through its industrial automation and control segment. The company has its geographic presence in around 54 countries with over 87 branches worldwide.