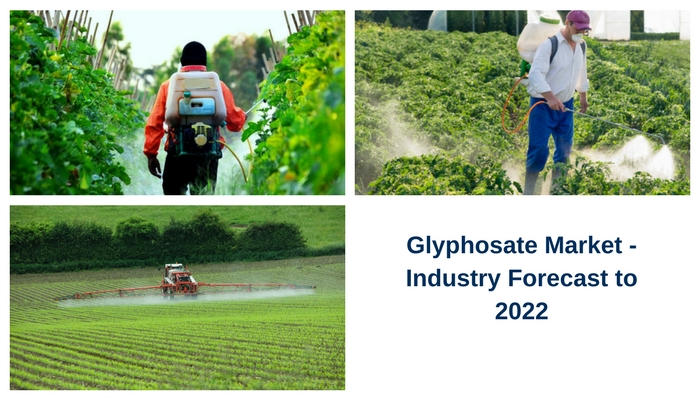 Increasing adoption of glyphosate to control the weeds across the globe is the major factor driving the growth of global glyphosate market. Crop losses due to pests, weeds, and diseases are a major threat not only to the global food security but for the incomes of rural families. Since the beginning of agricultural practice by the human being, there was a constant struggle to keep harmful weeds out of the land. With the non-biotic causes of crop losses, such as the lack or excess of water in the growing season, extreme temperatures, high or low irradiance and nutrient supply; biotic stressors have the potential to reduce crop production substantially. These biotics reduces crop productivity in various ways, classified by their impacts into stand reducers (damping-off pathogens), photosynthetic rate reducers (fungi, bacteria, viruses), leaf senescence accelerators (pathogens), light stealers (weeds, some pathogens), assimilate sappers (nematodes, pathogens, sucking arthropods), and tissue consumers.

The global losses of the crop because of weeds are widely increasing. For instance, in a country like India, which is one of the major crop producers across the globe is struggling to fight against the losses incurred by weeds. According to the Indian Council of Agricultural Research (ICAR), in India, the losses caused by weeds exceed the losses from any other category of agriculture pests like insects, nematodes, diseases, rodents etc. Of the total annual loss of agriculture produce from pests in India, weeds account for highest economic losses. The yield loss due to weeds in different systems of rice cultivation range from 15 to 90% and in another crop range from 6 to 87%. Similarly, weeds are one of the most significant threats to crop production in the developed regions such as North America. Crop losses in yield and quality due to weed interference, as well as costs of controlling weeds, have a significant economic impact on the crop production.